Replying to your letter of the 8th inst. regarding patients' comforts at the New Building, I have taken the matter up with Mr. MacCauley, the Chief Attendant.

While at Guelph these patients were given MacDonald's tobacco; here we have been using the Kingston mixture. At Guelph they received a package every five days; here they get a package every four days. I feel it would be wise to make a change in the tobacco consequently I have instructed the Steward to purchase MacDonalds after this issue is used up.

I find that at Guelph only fifteen patients went out to work the rest remaining in the Airing Court or played cards in the dormitory. Here we have some thirty patients working outside and an equal number employed on the Ward, in the kitchen, vocational room, school room etc.

I made enquiries about concerts and find that at Guelph some fifteen or twenty patients would attend an occasional concert put on by the prisoners in the Reformatory section. Regarding programmes here, other than the radio and an occasional concert we have not very much to offer in the way of entertainment. However, we hope to start motion pictures during the coming Fall and Winter months.

I also made enquiries about the food and Mr. MacCauley measures so that the food is much better here than was served at Guelph both quality and quantity being better. Religious services too, are better attended here than at Guelph. In the Reformatory the attendance in the Criminal Insane Division was never more than a dozen, here we have an attendance of thirty and upward each Sunday. With regard to our Occupational class, I am glad to report that we have a small but enthusiastic group of workers. I understand while at Guelph that for two years prior to their transfer, no Occupational Therapy classes were conducted for the Criminal Insane. Our school is conducted here similar to Guelph and our attendance number anywhere from nine to twelve.

Lastly with regard to sports patients enjoy foot ball and throw rubber horse shoes. They also have a game of hand ball which is similar to baseball but is played without a bat. They usually spend an hour and a half to two hours morning and afternoon in the court yard.

I beg to remain,
Your obedient servant,

This item has no relations. 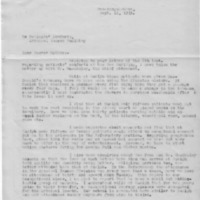