Letter from H. M. Robbins, Deputy Minister of Hospitals, to Superintendent of Penitentiaries, dated June 29, 1933. Confirms that no act of the legislature was needed to create the Criminal Insane division of the Ontario Hospital, Penetanguishene.

FROM THE DEPUTY MINISTER OF HOSPITALS

Your letter brings up a number of points and I shall deal with them as they occur in your communication.

I regret I am unable to send you a copy of the Hospitals for the Insane Act as it is not pubslihed in pamphlet form. If you have access, which I presume you have, to the Revised Statutes of Ontario for 1927, you may refer to Chap. 353.

No special act of the legislature was necessary to create th criminal insane division of the Ontario Hospital, Penetanguishene. That Institution has been used for the chronic insane for approximately the last three decades. The criminal insane division was an addition to the already existing Institution. Of course, an Order-in-Council designated the type of inmates in question.

I submit that you have a wrong perspective of the authority surrounding the custody of these Federal insane convicts in the Ontario Hospitals. There is nothing in the Hospitals for the Insane Act dealing with their cases. These types of patients, following Provincial permission and other pre-requisites have been admitted to and detained in the Ontario Hospitals solely on the warrants of the Minister of Justice. So other detention authority is employed.

For instance, if a writ of habeas corpus were to be served on a Superntendent or myself, I would simply point out to the Supreme Court that the convict-patient is held on the order of the Minsiter of Justice and whom the Provincial administration allowed entry in veiew of the lack of facilities under R.S.C. 1927, c. 154, s. 54 at Kingston Penitentiary.

In the circumstances, I think you will readily acknowledge that these 14 men in question are still Federal wards and such until their sentences expire. Naturally, I feel that a warrant should be issued for their change in environment. Of course, as the original warrants are kept at your Office, I think probably it might be wiser to draw up new ones so that they would act as an extension. However, this is only a suggestion and a matter of primary concern of your Office.

As all the inmate population of the Ontario Hospital, Guelph were taken to the special purpose wing of the Hospital at Penetanguishene, my Office is not asking you to pay the expense involved in covering the 14 Federal insane convicts. They were transferred on the presumption that you would readily antedate the warrants to cover the matter. Then again, the transfer was carried out with such expedition and secrecy that my Office did not really have time to notify you.

there is really no doubt in my mind as to the concern of your office in this matter and I hope with the presentation of the above advice, the situation will be clarified accordingly, but, if I can aid additionally, please feel free to correspond with me.

This item has no relations. 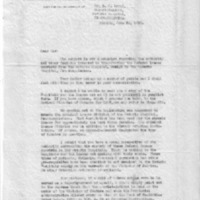