The only specialized forms of treatment to stretch the entire 81-year history of Oak Ridge were the Occupational, Vocational, and Recreational therapies. These unique programs operated in tandem with every other treatment that was applied at the division.

The three therapies have roots in what was known as "moral treatment" - a philosophy that characterized mental health institutions throughout the nineteenth century. This tradition emphasized a need to engage patients in activities that were deemed purposeful: patients were thus expected to work (without pay) and to participate in a variety of recreational activities. The Occupational, Vocational, and Recreation therapies grew into their own in the immediate post-World War I years as forms of specialized rehabilitation for returning, injured soldiers. They were afterwards integrated into the mental hospital system.

While the terminology - "Occupational," "Vocational," and "Recreation" - was used in the earliest reports of the Criminal Insane division, the actual distinction between these therapies was often blurred in the early decades. For example, activities described in 1933 as being in the Occupational Therapy department were, the following year, characterized as Vocational Therapy. Similarly, Recreational programming was overseen during this period by the Occupational Therapist. Efforts have been made in this exhibit to keep the distinctions separate, but the tight overlap and connections between the three therapies should be noted.

In the planning of the Criminal Insane Building in Penetanguishene, a vision of purposeful diversion for the patients was conveyed by hospital administration:

"An attempt will be made to occupy their minds with other interests, so they will not find time to brood over their supposed troubles, and arrangements have been made to give them the advantage of all the benefits of occupational therapy" ("Ontario Hospital addition is fine modern structure," 1932).

When the division was opened in 1933, the Occupational Therapy program occupied three rooms in the basement of the building and included activities such as the manufacturing of fibre and cement furnishings, basket and rug weaving, boot and shoe repair, and upholstery. The program was further expanded in the second year to include carpentry and mattress-making. George Strachan, one of the original staff transfers from the Guelph Reformatory, was the Criminal Insane Building's first Occupational Therapist and supervised both the Occupational/Vocational programming as well as the Recreational services throughout the 1930s.

The talents of the patients as revealed through the goods they produced within this programming were celebrated by the administration - a suite of furniture was even sent to be displayed at the 1933 Canadian National Exhibition in Toronto. The grounds of the hospital also benefitted from the work of the patients in the new division: in 1933 patients made 102 concrete bench ends, 36 flower pot urns, and 40 concrete lamp standards; a collection of cement bird baths were added in 1936.

Despite its early roots in moral treatment, Occupational Therapy was still a relatively new practice when the Criminal Insane Building opened in 1933. The University of Toronto had established the first Occupational Therapy program in 1916 in order to address the needs of returning soldiers. The Canadian Association of Occupational Therapy held its first meeting in 1930 and obtained its Charter four years later.

Occupational Therapists in the Ontario Hospital system began as medical artisans of sorts who guided prescribed activities for the purposes of promoting the recovery of one's health. As the profession developed, increased focus was placed on assisting the patient in skill development. 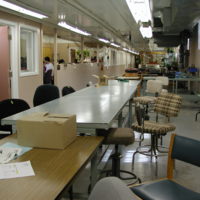 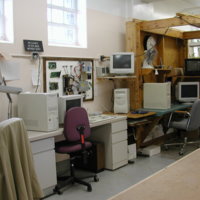 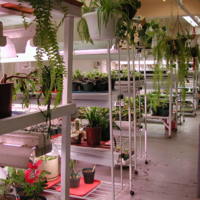 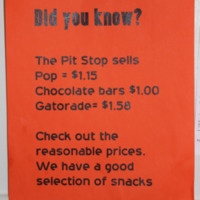 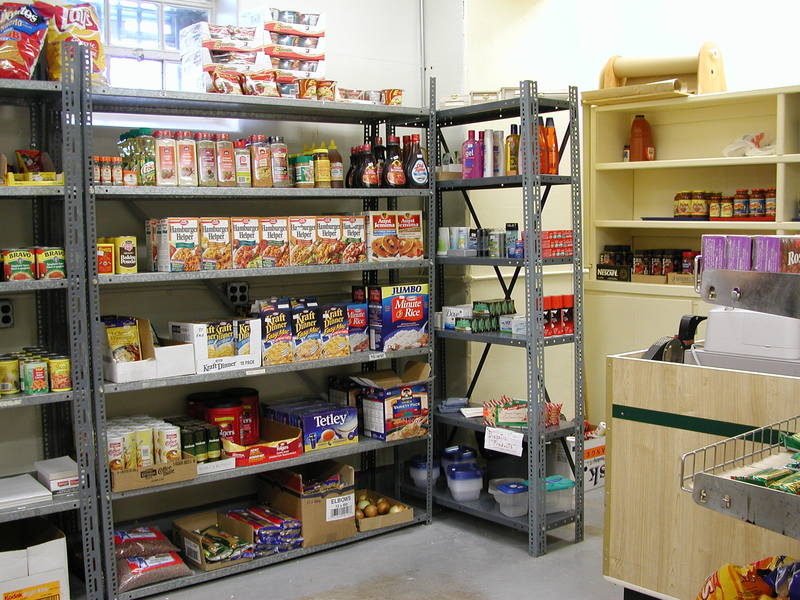 The Pit Stop of Vocational Services, 1999

As the years progressed, the Vocational Services department expanded to included several areas in the basement of the Oak Ridge building:

Together these differing areas of the Vocational Services department presented opportunities for patients at Oak Ridge to develop or explore particular skills while also providing a sense of purpose and accomplishment.

Throughout its history, Oak Ridge took contracts from local companies and sold individual items to staff and members of the surrounding communities. For a short period of time these sales were expanded beyond the immediate Penetanguishene area with patient-built bird houses being included in the 1962 Eaton's catalogue for home sale. It is unclear, however, whether this practice extended beyond a single year.

[For a discussion of remuneration for patient work at Oak Ridge, please see the Work Gangs and Recreation exhibit] 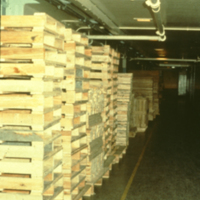 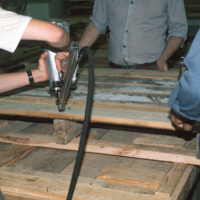 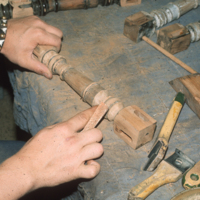 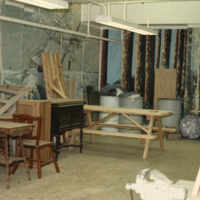 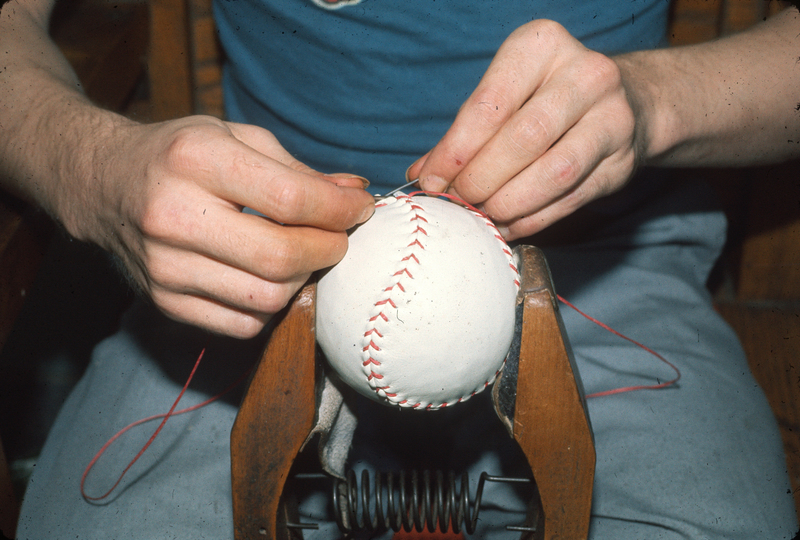 In 1964 the Oak Ridge division signed a contract with Winwell, a Barrie-area company, for patients to sew baseballs. "The Ball Shop" was in turn opened in the basement area under Ward 04.

Patients assigned to the Ball Shop were taught the various steps required to piece together a baseball. The process included:

The steps were taught as a progression with patients practicing and mastering the simplest task before moving on to learn the next step.

The Ball Shop was eventually closed in 1982 when it was determined that the task had become too difficult for many Oak Ridge patients to be able to participate. 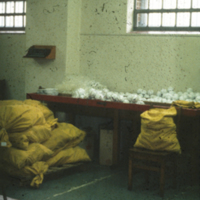 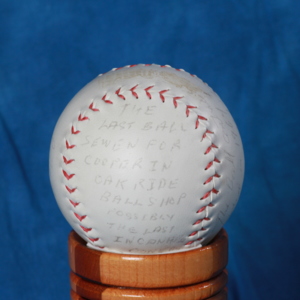 Last baseball made at Oak Ridge, 2014 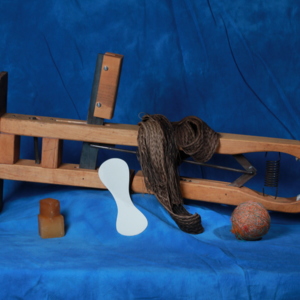 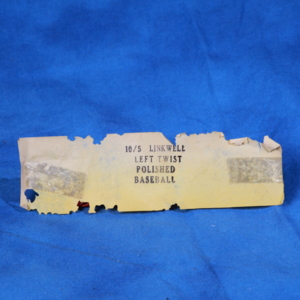 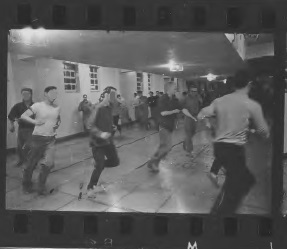 "Recreational activities continue to play a prominent part in the treatment of patients particularly those in the new building. From a therapeutic standpoint we realize the necessity of varied amusements and for this reason games and sports are strongly encouraged" (Lynch, 1935, p. 29).

The Recreational programming was restricted in scope, however, in terms of available space for most of the division's history. While the outdoor yards provided some areas for sports, there was no specialized space indoors. This was especially limiting during the long winter months.

For much of Oak Ridge's history, recreational activities were run in shared spaces in a basement area of Oak Ridge. A weight room was eventually added to this area in the 1980s. The opening of the Sports Complex in 1991 greatly contributed to the programming options for the Oak Ridge community. 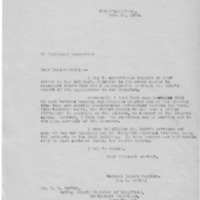 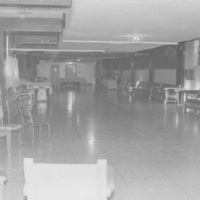 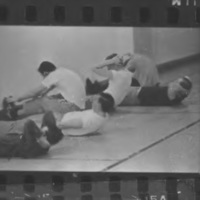 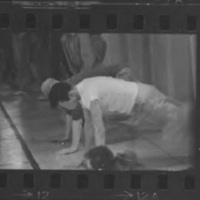 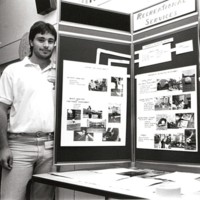 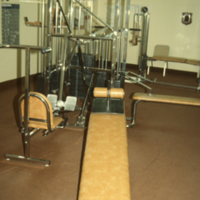 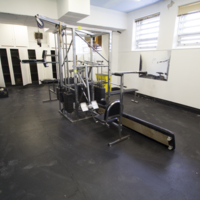 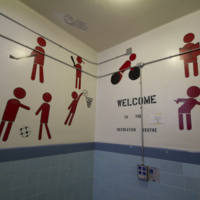 Mural in stairwell at entry to Recreation area, 2014

Graham, R. (1988). Building community support for people: A plan for mental health in Ontario. Toronto, ON: Queen's Printer for Ontario. Retrieved from http://ontario.cmha.ca/files/2011/06/grahamreport.pdf