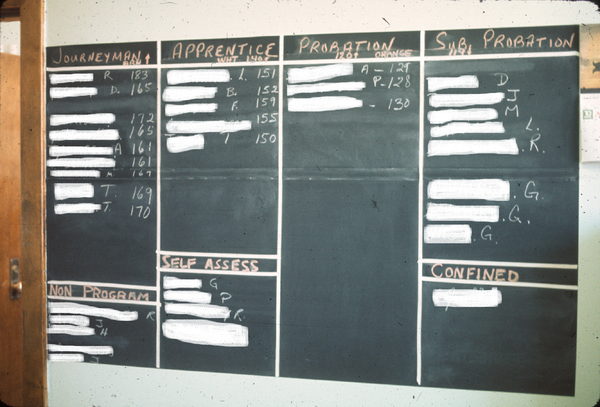 During the 1960s-1970s, the Social Therapy Unit (STU) dominated attention at Oak Ridge, both internally and externally, due to its radical and novel programming. But the STU - and its later iteration in the 1980s - only included half of the patient population. The remaining four wards of Oak Ridge found themselves a part of a detailed program based on the concept of a "token economy."

A token economy is a behaviour modification system that operates on the principles of operant conditioning. Targeted behaviours are reinforced by the assignment of "tokens" - participants are then permitted to exchange their tokens for some type of reward. In the case of Oak Ridge, the "tokens" that patients earned were points which, when a sufficient number had been accumulated, could be exchanged for "privileges." These privileges ranged from extra cigarettes during the day to additional recreational materials (ex. books, radios) to personal time in one's room or on the ward.

At Oak Ridge there were two major token economy programs over the course of its history:

The Active Therapy Unit (ATU) drew on the principles of behaviour modification for its framework, meaning that patients earned set privileges for behaving in prescribed ways and lost those privileges when they did not. The aim was to encourage the development of adaptable social skills while discouraging more aggressive or anti-social tendencies.

The ATU comprised four wards: A, B, C, and D. The upper-level wards, B and D, featured the highest levels of security of the four and the least number of privileges that could be earned as part of the program. Their focus was directed towards eliminating aggressive and assaultive behaviours while emphasizing the development of basic hygienic skills, work habits, and cooperation. B-Ward operated as an admissions ward where initial assessments were conducted; D-Ward was geared towards more long-term patients.

The lower-level wards, A and C, were characterized by much lower levels of security and a greater range of privileges that could be earned. Patients on both wards typically worked in the Vocational Services area for a small wage or in other off-ward areas. C-Ward focused in particular on the development of a patient's social skills and self-monitoring of their behaviours. D-Ward held the greatest autonomy for the patients of the four wards on the ATU and attempted to model a non-secure psychiatric facility in preparation for the patient to eventually be transferred to such an environment.

The program was structured such that patients were expected to move through the ward levels from the higher security, lower privilege wards on the upper floors (B and D) to the lower security, higher privilege wards on the lower floors (A and C). The behaviours of the patients were recorded and charted by staff in order to track their progress through the program.

Patients on the ATU were considered unsuitable to the higher communication requirements and close quarters of the STU. This group included men who were nonverbal or generally struggled to communicate in English, those who were intellectually delayed, those who were elderly, as well as those who had a history of aggression or violent behaviour within the institutional environment. By 1976 the ATU included 146 patients. 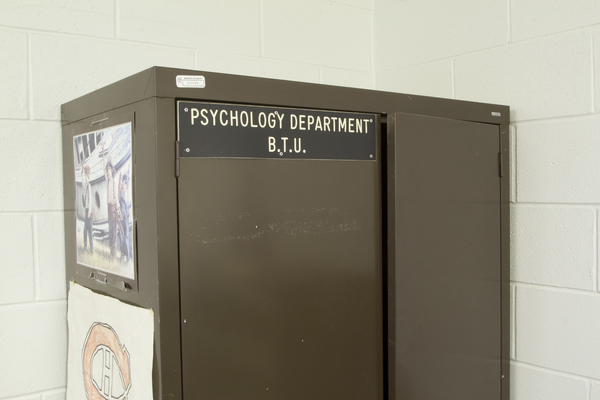 After a period of internal upheaval on the Social Therapy Unit in the later 1970s and growing criticisms in the early 1980s, Oak Ridge was reorganized in June of 1983. Instead of being comprised of two units of four wards (the STU and the ATU), Oak Ridge was divided into four two-ward units:

As part of this restructuring, the original four ward ATU was transformed into the two ward Behaviour Therapy Unit (BTU).

At its core, the BTU retained links to behaviour modification and continued the token economy system that the ATU had initiated. By the 1990s, the BTU increasingly came to focus on life skills training, social skills training, and therapeutic recreation programs. 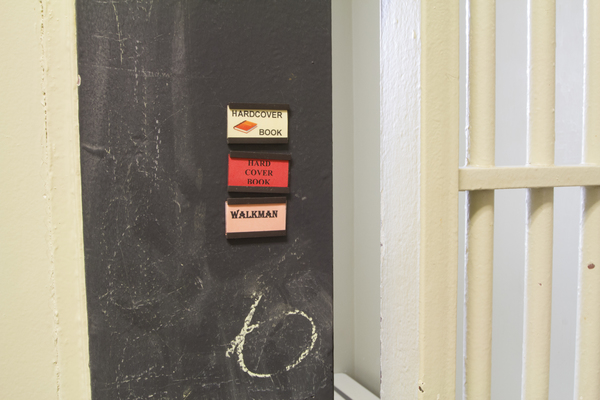 Traces of the Token Economy System

The practice of awarding privileges to Oak Ridge patients as a means of reinforcing desired behaviours and removing privileges as a means of discouraging undesirable behaviours continued from the days of the ATU through to the final years of Oak Ridge. While it operated on a more individual level than the original ATU and BTU ward-wide programs, some patients continued to follow a privileges earned/removed program through to the final days of the Oak Ridge division.

Quinsey, V. L., & Sarbit, B. (1975). Behavioral changes associated with the introduction of a token economy in a maximum security psychiatric institution. Canadian Journal of Criminology and Corrections, 17(2), 177-182.