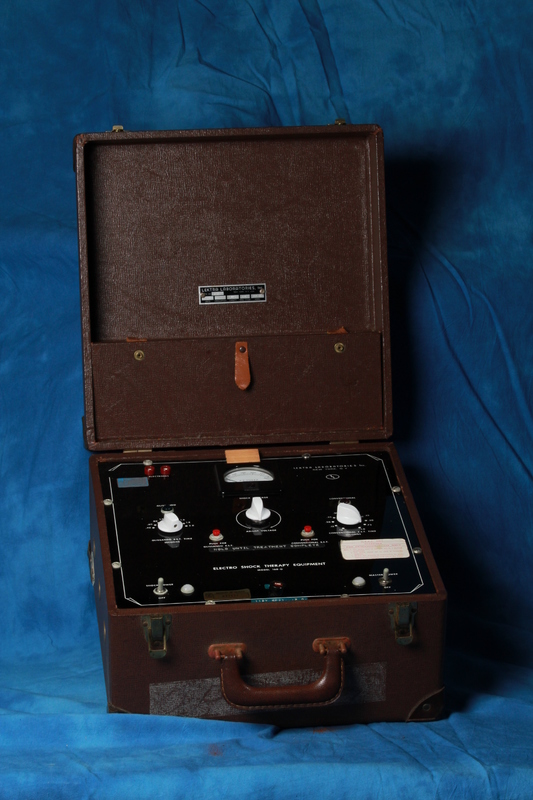 ECT machine on display in Penetanguishene, 2014 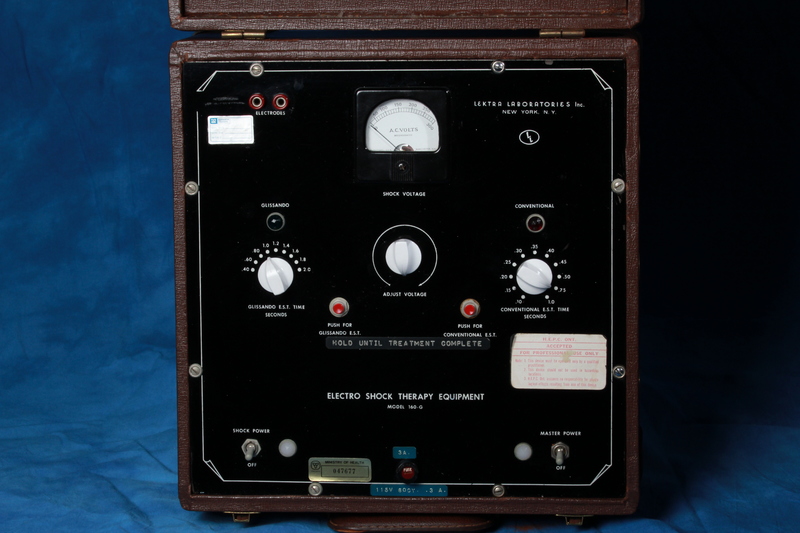 Control panel of ECT machine on display in Penetanguishene, 2014

Treatments upon the Body

The Criminal Insane Building at the Ontario Hospital, Penetanguishene was opened in the midst of what was known as the "somatic therapy" era in psychiatry. The somatic therapies - literally, physical treatments on the body - were common from roughly the 1930s until the advent of psychopharmaceuticals in the 1950s. There were four main varieties: (1) Insulin coma therapy; (2) Metrazol shock therapy; (3) Electroconvulsive shock therapy; and (4) Psychosurgery. Only the latter two were used at the Oak Ridge division in Penetanguishene.

Electroconvulsive shock therapy (ECT) involves administering an electrical current across the head. Patients experience a convulsion and often lose consciousness. It quickly replaced Insulin Shock and Metrazol therapies in the Ontario Hospitals due to its lower staffing requirements and lower risk of side effects to the patient.

Electroconvulsive shock therapy had been introduced in 1938 by Italy's Ugo Cerletti and Lucio Bini. The procedure was the last of the somatic therapies to be adopted by the Ontario Hospital system, with the first institutions beginning to adopt it in the early 1940s (Dyck et al., 2008-2009). ECT was brought to the Criminal Insane division a few years later.

The machine originally used in Penetanguishene was a Series 160, Model G from Lektra Laboratories Incorporated. It was a common model across institutions, boasting improved safety features, ease of administration, and durability from earlier models.

Specifically, the 160-G featured two on-off power controls: one master control switch and one shock control switch. This meant that the circuit could be powered off even while the rest of the machine remained turned on. To administer the shock current, one of two red buttons had to be held down - as emphasized by the added label "Hold until treatment complete" on the Penetanguishene machine. It also offered two types of timing intervals: conventional and Glissando. The conventional dial presented options for 11 different intervals, ranging from 0.10 to 1.0 seconds. The Glissando dial presented nine different intervals.

The psychosurgery of the somatic treatment era is typically traced to the work of Portugal's Egas Moniz in 1935. Moniz developed an instrument known as the "leucotome" which he used to cut the frontal lobe of the brain. The purpose of this procedure was to permanently modify the mental processes in someone who was mentally ill.

Psychosurgery quickly spread on an international scale, with modifications to the technique and instrument varying per country. The most well-known modification is likely the "lobotomy," introduced in the United States by Walter Freeman and James Watts. Their technique involved inserting a dull knife-like instrument into the brain from the top of the skull and cutting the brain fibres by using a sweeping motion across the lobes. Freeman would later develop this method further, developing the "ice-pick transorbital lobotomy" which involved inserting a sharply pointed instrument through the eye socket and into the brain.

The Leucotomy in Ontario

In 1938 Drs. Kenneth G. McKenzie and Clarence B. Farrar visited Freeman and Watts in the United States and observed their psychosurgical procedure. Freeman later visited Ontario and Quebec on a number of occasions to lecture on his work.

The first psychosurgery performed in Ontario was by McKenzie in Toronto on July 23, 1941. He would go on to modify the technique and develop his own leucotome. McKenzie's procedure involved cutting a hole in the side of the skull and inserting the leucotome. A plunger on the instrument was then depressed which would cause two wires to protrude and cut into the brain.

The practice was widely applied in the Ontario Hospital system, moving from New Toronto to London, Kingston, Hamilton, Whitby - and Penetanguishene (Dyck et al, 2008-2009). Ontario's leuctomy program ran from 1941 until approximately 1966, involving more than 1,400 patients across the province.

In Penetanguishene, the procedure was perfomed on at least 40 patients across the Hospital's two divisions during the early 1960s. It was Superintendent Dr. B. A. Boyd who introduced the procedure shortly after his arrival. He had previously worked directly with McKenzie at the Ontario Hospital, Hamilton. Boyd did not perform the surgeries himself but instead McKenzie - who was, by that time, retired - travelled up to Penetanguishene.

Boyd reported to Joan Holloban of the Globe and Mail newspaper that the procedure was used only as a last resort when other treatments had failed to produce results:

"This operation, which severs certain fibres of the brain, reduces tension. It is only used for chronic, long-standing cases for whom other treatments have been ineffective.  It has been found helpful for the aggressive, disturbed, destructive person and for the individual with constantly recurring illnesses who is continually in and out of hospital. These patients fall in the cateories of schizophrenics, manic depressives, and those suffering from involuntional melancholia" (Holloban, 1963, p. 7).

The process could have serious effects to the demeanour of the individual. While some patients were reported to be calmer and more mellow following the procedure, others suffered more extreme changes. Roger Caron, a former patient of the Oak Ridge division who later published an autobiography of his experiences, described his impression these individuals shortly after his arrival in Penetanguishene:

"All around me were human vegetables rendered 'tame' through the use of frontal lobotomy operations in which neurosurgical drills killed a part of the brain that was thought to trigger violence. In reality they were reduced to bona fide zombies" (Caron, 1978, p. 213).

The other somatic therapies of this period included Insulin coma therapy and Metrazol therapy. Insulin coma therapy involved injecting a patient with insulin to produce unconsciousness. After a period of time, the patient would be revived. Metrazol shock therapy operated along a similar premise: metrazol - a circulatory stimulant - was injected into the body, producing convulsions. The premise behind both therapies was that the shock to the body would reset misaligned thought processes. As mentioned, there is no evidence that either of these therapies was ever used at the Criminal Insane division in Penetanguishene.

Collins, B. M., & Stam, H. J. (2012). Psychosurgery beyond Portugal and the United States: A transnational perspective.