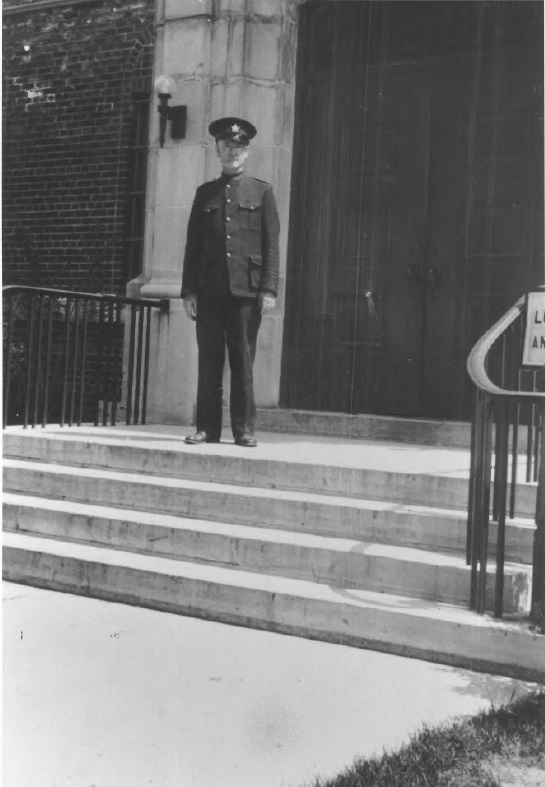 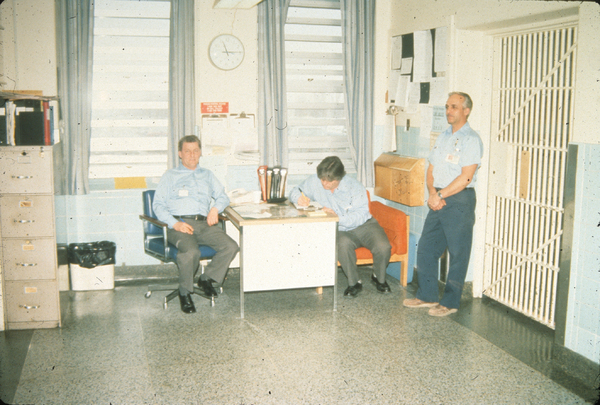 The role of the Attendant was integral to the daily management of Oak Ridge throughout its 81 year history. While the Administration and various professional staff departments helped to direct the overall vision of the treatment programs, it was the Attendant who monitored patients, kept the daily routine in check, and assisted in the application of many of the practical components of treatment. For much of the early history of Oak Ridge, there were few support staff - minimal kitchen employees and no housekeeping staff. These tasks fell to Attendants and patients.

When it was first opened, the Criminal Insane Building employed 18 Attendants along with a Chief Attendant, Night Chief, and seven Attendant Supervisors. These individuals worked alongside a school teacher and an Occupational Therapist for a total of 27 staff members in a building that opened with 100 patients.

By 1962, Attendant numbers had grown to 100 to help match the growing patient population of 262. The numbers would dwindle during the 1960s and 1970s before being increased again in the years following the Hucker Report of the mid-1980s.

For the first 15 years of the division, Attendants worked 12 hours shifts - either the day or night shift between the hours of seven in the morning and seven at night. They were granted one day off a week. In 1947 additional Attendants were hired to allow for the creation of eight-hour shifts.

Even with these added numbers, Attendants were always outnumbered by patients. In an interview in 1991 with Hospital historian Robert F. Nielsen, pharmacist Jim Ridyard described the sense of duty staff felt to one another to maintain a safe environment:

"Staff felt a sense of duty toward each other because they knew that their fellow workers would have to cope with a 'two-man' team on the ward at night. B & D wards housed some violent patients which was especially difficult for two individuals at night. An attendant was automatically suspended without pay for three days if he left another staff person alone with a patient. Attendants felt a sense of responsibility toward the community and conducted themselves accordinly when engaging in social activities while off duty" (Ridyard interview, 1991).

The responsibilities of the Attendant extended beyond merely keeping the routine of the wards running. They were also directly involved in program implementation throughout the decades. Superintendent Dr. Barry A. Boyd described in the early 1960s:

"Although 'Oak Ridge' has three psychiatrists, three social workers and a psychologist, the impact of trained professional staff directly on the patients can never be great. We must rely on the interpersonal contact between inmate and guard, and amongst inmates to accomplish our purpose" (Boyd, 1962-1963, p. 345).

[It should be noted that this quote from Boyd was derived from an article aimed at a correctional audience. In his writings about the division, the term "Attendant" was more regularly employed]

In addition to their regular shift duties, Attendants were also expected to participate in the recreational and social activities provided for patients, including picture shows and evening dances. A social club specifically for Attendants was in operation from 1933 and included bi-monthly euchre nights and other entertainment activities. 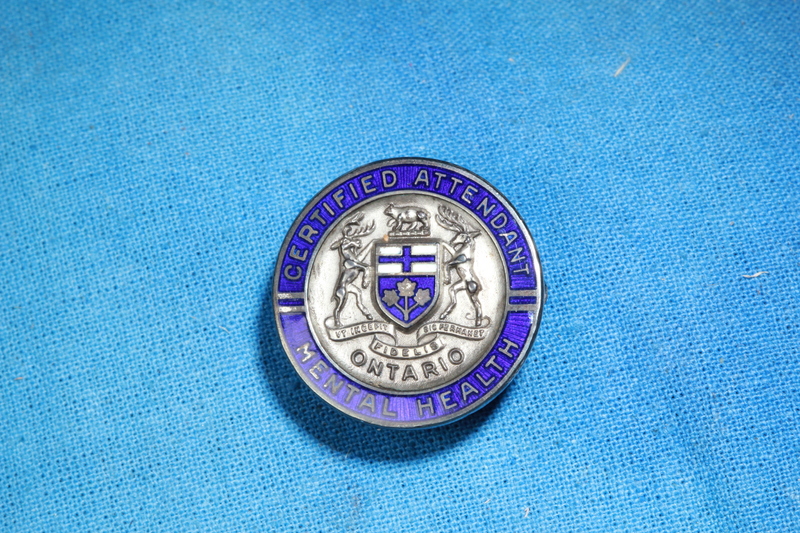 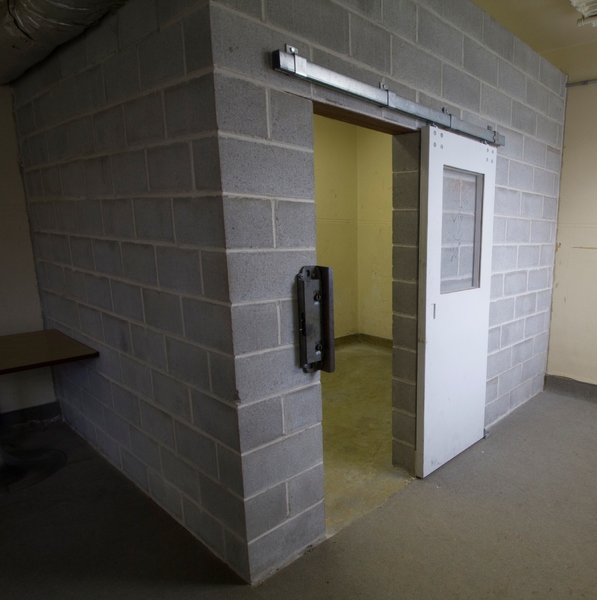 While there was no official training program or requirements for Attendants in the earliest years of the division, many had arrived with previous experience at other institutions in the Ontario Hospital and Reformatory systems. All of the supervisory staff had previous work within institutions, as did several of the Attendants. Chief Attendant Robert MacAulay, two of the Supervisors, and several Attendants were recruited directly from the psychiatric wing of the Guelph Reformatory - as such, they had already been working directly for several years with the first 100 men admitted when they were all transferred to Penetanguishene.

General instructions in medical care were given to all new employees, but there was no official nursing or other medical training required during this early period. A male nurse was hired in 1938 to assist in the distribution of medications and charting of progress, but the bulk of this work remained the domain of the Attendant.

In the 1960s, educational courses were inaugurated for Attendants. Superintendent Dr. Barry A. Boyd wrote about these techniques in an article intended for correctional facilities:

"An introductory lecture, with text books, notes and films can teach techniques. It is wise to have the chief guard and supervisors give some of these lectures, to keep them involved and to add prestige to the instruction. Attitudes can best be learned by observing and following the example of senior guards and professional staff. All too often attitudes taught in introductory, lectures, are scoffed at and derided by seniors. There is thus a need to start at the top and work down in such a program.

To change attitudes, the small group discussion technique seems most promising. It can centre around problem cases and how to handle them. Role playing technique can be used where one or more of the guards play the part of troublesome inmates, and others discuss how best to handle him. The ultimate use of this technique would be 'sensitivity training' for the guards themselves. This process must first concentrate on the senior guards and supervisors who can then exert a favorable influence on the junior men. In small group discussions it islikely that the staff will first be occupied with 'beefs,' salary problems and secuirty, and only later come around to constructuve activities. The chief guards at first will be threatened by this expression of opinion from below" (Boyd, 1962-1963, p. 345-346).

Increasingly, training requirements became more stringent and many of the Attendants by mid-century had acquired specialized nursing training.

It was not until 1983 that the first women were hired to work as Attendants within Oak Ridge. Seven female Attendants were hired in that year, breaking a 50-year tradition of an exclusively male workforce. Due to the nature of the work required by Attendants in terms of security and violence prevention, Oak Ridge was exempt from Ontario's human rights legislation which would have prevented discriminatory hiring practices based on gender.

Nancy Scanell, one of this first group of Attendants to be hired, reported no adverse reactions to the presence of the women on the part of the patients. Describing her first three months at Oak Ridge, she told the Globe & Mail:

"Patients don't even pay attention to us. I haven't met up with any that were hostile or unfriendly" (Scanell as quoted in "Oak Ridge centre now hiring women," 1983, p. 8).

While this sentiment would be repeated by many over the remaining three decades that Oak Ridge was in operation, the recruitment of female Attendants was not without incident. In 1997, for example, several patients voiced their concern about the shower room policies. While a few were uncomfortable with the policy generally, the majority focused on the fact that female Attendants were sometimes assigned this duty. Several patients were quoted in the local newspaper coverage of the issue:

"If a guy is towelling off, why would you want to watch him, to see if he's doing it right? It's a joke" ("Patients don't like female attendants at shower time," 1997).

"I can't relax with a female in the hall outside the shower room" ("Patient protest aims at female MHC staff, 1997).

One patient brought the concern to the Ontario Human Rights Commission and another staged a "shower strike" - refusing to use the shower rooms until the policy was changed. The Hospital and union replied that while efforts were made to assign male Attendants to this post, staffing restrictions sometimes required that female Attendants monitor the shower area. Dan Parle, spokesperson for the Hospital during this period specified:

"We try to take into account patient dignity and assign male staff, but a nurse is a nurse is a nurse. We use the most qualified person for the job" ("Patient's don't like female attendants at shower time," 1997).

Dividing Up the Attendant Role

In the final decades of the Oak Ridge division's history, the duties that had been assigned to the Attendant were divided across several positions. A diverse health care team of specialists contributed to the programming and daily operations of the division. The direct, daily care of patients on the ward involved nurses and registered nurses. They worked with individuals in a position unique to Oak Ridge - the Program and Operation Support Worker (POSW). Their role involved providing 24-hour security within the Oak Ridge division which involved direct patient care, operational support, and security.

Lynch, D. O. (1935). Annual report of the Penetanguishene Hospital for Insane and Criminally Insane for the year ending October 31st, 1933. Sessional Papers, Fifth Session of the Eighteenth Legislature of the Province of Ontario. Toronto, ON: T. E. Bowmein.

McClenahan, C. A. (1937). Annual report of the Penetanguishene Hospital for Insane and Criminally Insane for 1936. Sessional Papers of the Province of Ontario. Toronto, ON: T. E. Bowmein.

McClenahan, C. A. (1939). Annual report of the Penetanguishene Hospital for Insane and Criminally Insane for 1938. Sessional Papers of the Province of Ontario. Toronto, ON: T. E. Bowmein.

McClenahan, C. A. (1944). Annual report of the Penetanguishene Hospital for Insane and Criminally Insane for 1943. Sessional Papers of the Province of Ontario. Toronto, ON: T. E. Bowmein.