No thought was given to the accommodation of visits from friends or family in the original construction of the Criminal Insane Building. With patients admitted from all over the province, few had families that lived locally. Before making the trip to Penetanguishene, visitors were expected to call ahead and arrange a time. Once inside the building, they sat across a small table from their loved one in an open hallway with no real privacy. It would take 50 years before a space geared towards enabling patients to receive visitors was completed at the division.

As part of a series of renovations that took place in 1983, the Visitor Complex was added to the Oak Ridge building. The large, open room was located to the left of the main entrance, on the ground floor. As a result of the renovation, patients were able to host visitors in a dedicated room, complete with a canteen. One corner of the room was enclosed to allow for more private discussions. The windows still featured the same bars as the rest of the building, but the area was brighter than the original hallway had been.

In order to visit a patient, there were a series of rules that had to be followed. Patients had to be approved to leave their ward on the day of the visit, they had the right to choose whether or not to receive their visitor, and staff could cancel or terminate the visit if the time interfered with treatment or if a security concern arose. A visitor had to sign in and - in later years - have their photo taken at the front office. Children under the age of 14 were not permitted inside Oak Ridge, a patient could receive only four visitors at a time (unless special arrangements were made), and those who were admitted on a Warrant of Remand could only receive immediate family members as visitors.

There was likewise a long list of items that were not permitted to be brought into the building. In addition to the standard items one might expect - weapons, potential weapons, narcotics - Oak Ridge also restricted visitors from bringing jewellery, cell phones, cameras, pets, and various food preparation items - including fondue sets and cutlery. 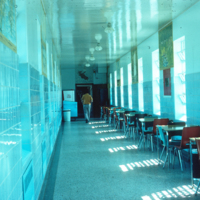 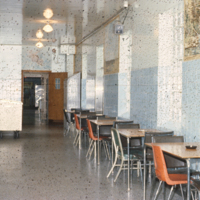 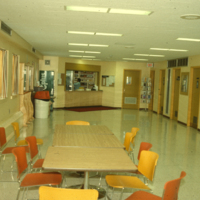 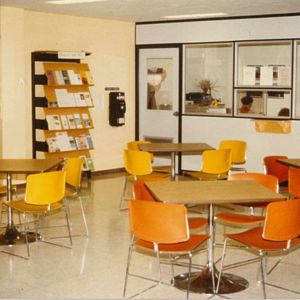 A school was available to Oak Ridge patients throughout its 81-year history. It generally occupied a room in the basement underneath one of the original wings to the building and, during its final three decades, was covered in patient-created murals.

Attendance could be recommended to individual patients, but remained optional. Instruction was based on the needs of the individuals attending, with courses offered at the elementary, secondary, and university-level. Credits were earned through correspondence courses.

A month after the first 100 patients were admitted to the division, Superintendent Dr. D. O. Lynch began writing to the Director of Hospitals for Ontario to arrange for the necessary supplies for a school. A school teacher, Mr. J. P. Powers, had been among the initial staff hires.

By the submission of the Annual Report for the division in November of that first year, the school was in full operation:

"A school under the direction of Mr. J. Powers, B.A., is progressing satisfactorily, there being an average attendance of ten pupils. Several patients are taking up high school subjects while the majority are acquiring an elementary education. It is hoped that one or two will be ready for the entrance examination next year" (Lynch, 1933, p. 27).

Powers was also sent for training at the nearby Ontario Hospital, Orillia to learn psychometric testing. He began administering intelligence tests to patients late in the summer of 1933.

Mr. Leonard O'Leary replaced Powers in 1936. His report the following summer indicated that he was following the curriculum set by the Provincial Department of Education for Public Schools - with some variations to accommodate the population he was instructing.

O'Leary lamented the lack of consistent attendance from the patients and the failure of the school to compete with the draw of the recreational programming:

"There are many disheartening features in connection with the past years work most notable of which is the difficulty of securing steady attendance. Since no compulsion can be exercised and presence at school is entirely voluntary there is nothing surprising in this state of affairs. The younger patients who would make the most desirable students and who must stand in need of school training are precisely the ones who are most attracted by the various forms of athletic activity which are a feature of life in the Hospital. With this, however, we can have no quarrel" (O'Leary, 1937, p. 2).

He also described the challenge of teaching a diverse group of students with varying educational backgrounds:

"Indeed the wide divergence of mental development, early environment and educational opportunity makes each patient so different from the other that regimenting even small numbers into classes which are expected to do the same work is almost out of the question. There are as many different classes as there are patients in the class-room at at given time. Each of these requires special consideration, handling and understanding and even our best efforts are going to fall short of perfection" (O'Leary, 1937, p. 5).

In his reports of the individual students, these differences are apparent: one man was listed as passing the correspondence exams in Latin and Greek from Queen's University while another was being taught to read and write. Between these two students were a range of "report card" summaries:

"Splendid student with an excellent record for the years work. Should have sat for entrance examination. Rather diffident. Fears of possible failure amounts almost to obsession."

"In spite of all attempts, it is doubtful if this student will ever make much progress. He is however keely interested and seems happy in the effort to learn writing. Gives absolutely no trouble."

"Not brilliant, lacks ambition. Weak in arithmetic and grammar, but a good student of history, geography, current events. His attitude at times anti-social, views strongly twinged with a harmless leaning to communism."

"Over confident in his own limited ability. Good student in arithmetic and spelling. Somewhat of a disciplinary problem. Resists correction. Very deficient in any study that requires dependence in his own efforts. Somewhat head strong. I do not think he will pass an entrance exam." 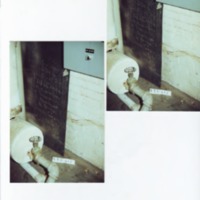 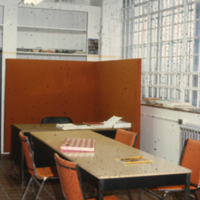 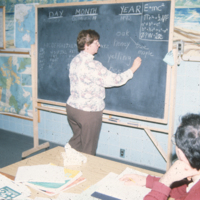 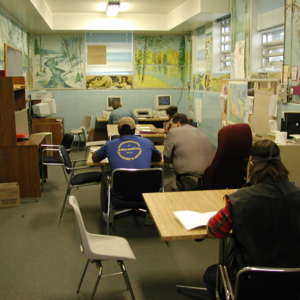 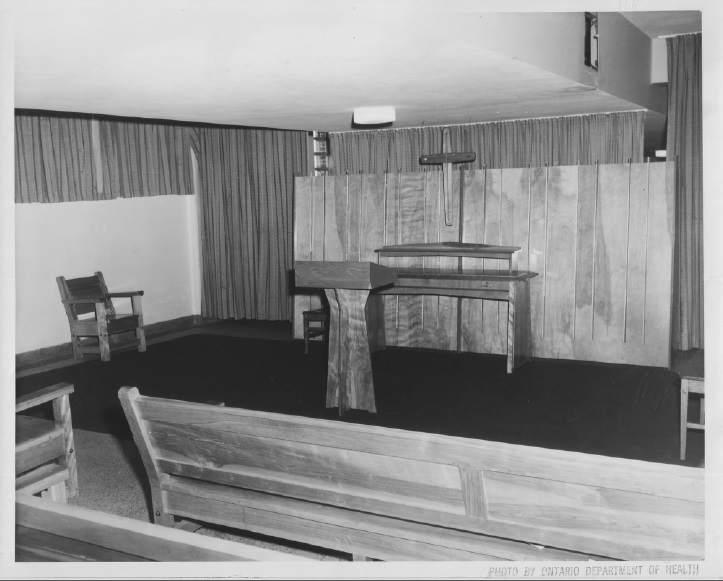 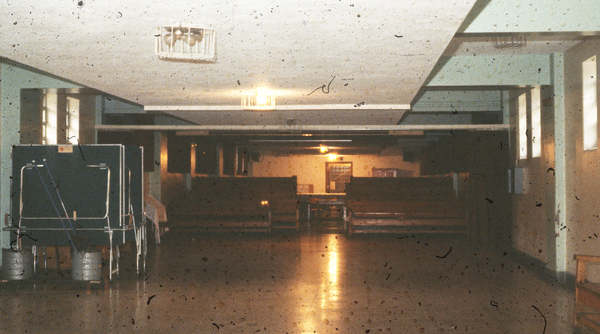 Close connections with religious communities has been a long-held tradition of in-patient mental health facilities in North America. Chaplains, Priests, Ministers, and Rabbis of various denominations were often associated with the institution in some capacity - some offering regular services and consultations, others being considered "on call." This tradition was alive in Penetanguishene from the time the property was used as a Reformatory in the late nineteenth century and was continued through its transformation to a mental health facility.

In the Oak Ridge building, no designated space was originally provided for religious services. For much of its history, a make-shift corner of the basement was shared with the recreational programming. Dedicated space for spiritual services at Oak Ridge were made available as part of the 1983 renovations.

It was not until the early 1990s that a dedicated group for Aboriginal healing and education was formed at the Mental Health Centre Penetanguishene. Known as Waussnodea Midiwigun, the group was initiated by patients within Oak Ridge:

"Waussnodea Midiwigun was created by several of the residents of the Oak Ridge facility. From talking amongst ourselves, and with the support of M.H.C.P. Chaplaincy, we approached the administration with our idea of having a place where we could spend some time in cultural learning and ceremonial 'prayer.' From this request grew the core of our Native Circle. Addressing the concerns of our culture and language is one of the issues among the members of Waussnodea Midiwigun. Soon other native patients began to participate with this small group" (Waussnodea Midiwigun, ca. 1991).

Funding was arranged to bring in a consultant to meet with the group and help them to further their education in Aboriginal customs and languages. Patients from the regional division of the Mental Health Centre Penetanguishene were also later invited to join the group.

In their description of the founding of Waussnodea Midiwigun in the early 1990s, the patients expressed why the establishment of the group was important to them:

"Our children must be given the opportunity to preserve the language both orally and in its written form, or a few generations from now, the language will be part of the past and irreplaceable. Too much of the knowledge of the customs and life values of our ancestors has already been lost. When a language dies, the vitality of a way of living and thinking dies with it. Once this Circle of life is broken, their way of life, their culture and the people will become even beyond memory.

The Native language is a living symbol of our cultural heritage. It's beauty and descriptiveness is preserved in the name of many places across our nation. 'Indian' is part of the Canadian identity" (Waussnodea Midiwigun, ca. 1991).